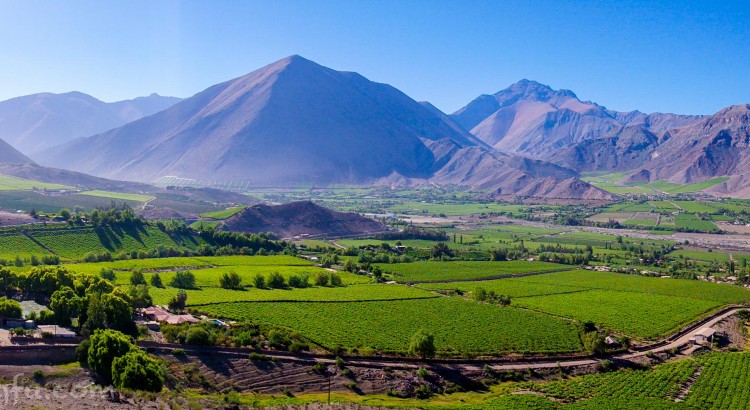 The Atacama Desert is pretty freaking big. 41,000 square miles big. It took us several long days of driving to make our way through it. Two other relevant bits of data: It’s also called the land of 10,000 mines and it is the driest non-polar desert in the world – the former leading to a tour of the largest copper mine in Chile and the latter partly explaining why so many of the world’s most important observatories are located here. It also provides plenty of opportunity for middle-of-freaking-nowhere-camping, which even after nearly a year on the road never gets old…

First we stopped at Chuquicamata, a massive open-pit mine responsible for the largest total production of copper in the world. The tour begins with a drive through the abandoned mine town previously inhabited by 30,000 miners. For health and safety reasons the town was shut down. It was a little eerie and felt like a proper ghost town. 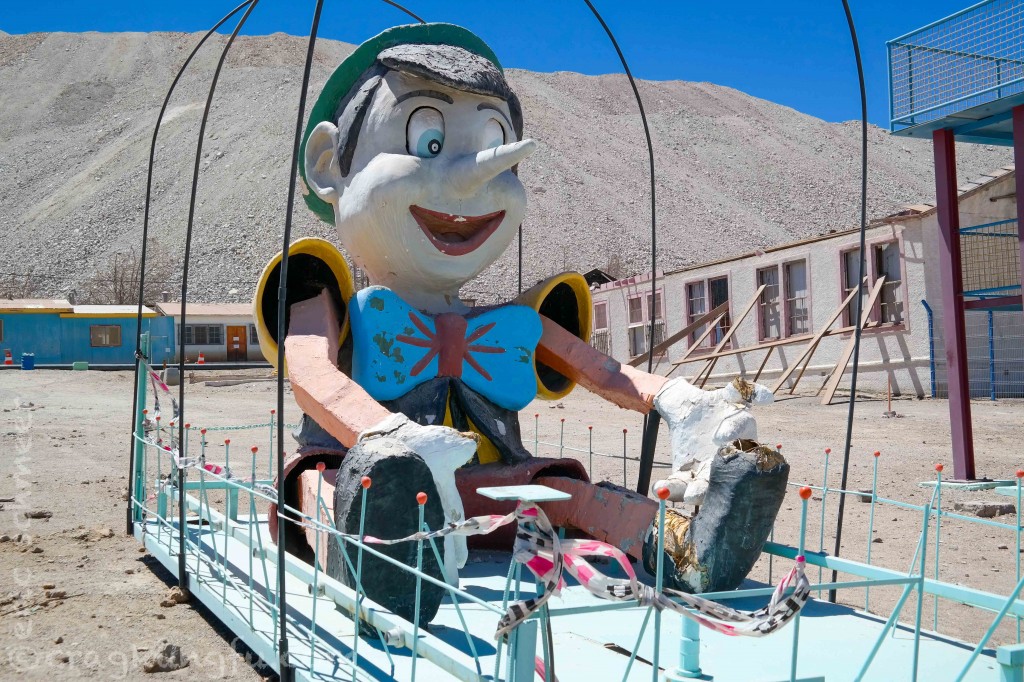 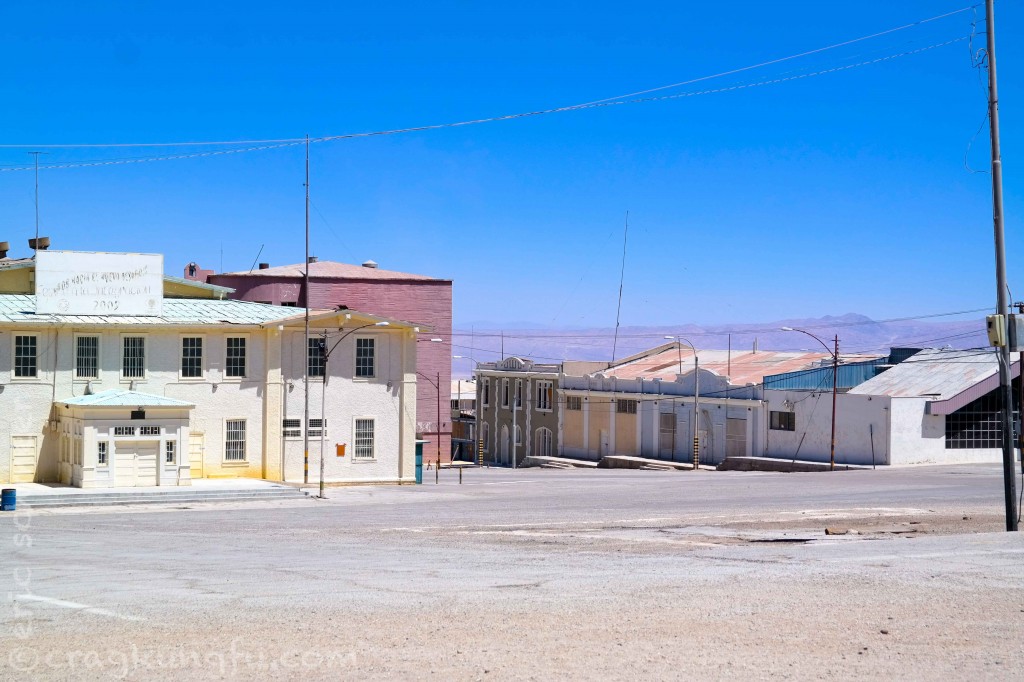 The sheer size of the operation is hard to fathom. First, take a look at the full sized pickup truck passing one of the dump trucks. That dump truck is the smaller of the two models in operation at the mine. It uses 3 liters of diesel per minute to operate and each tire costs approximately $40,000. They never stop running, day or night. 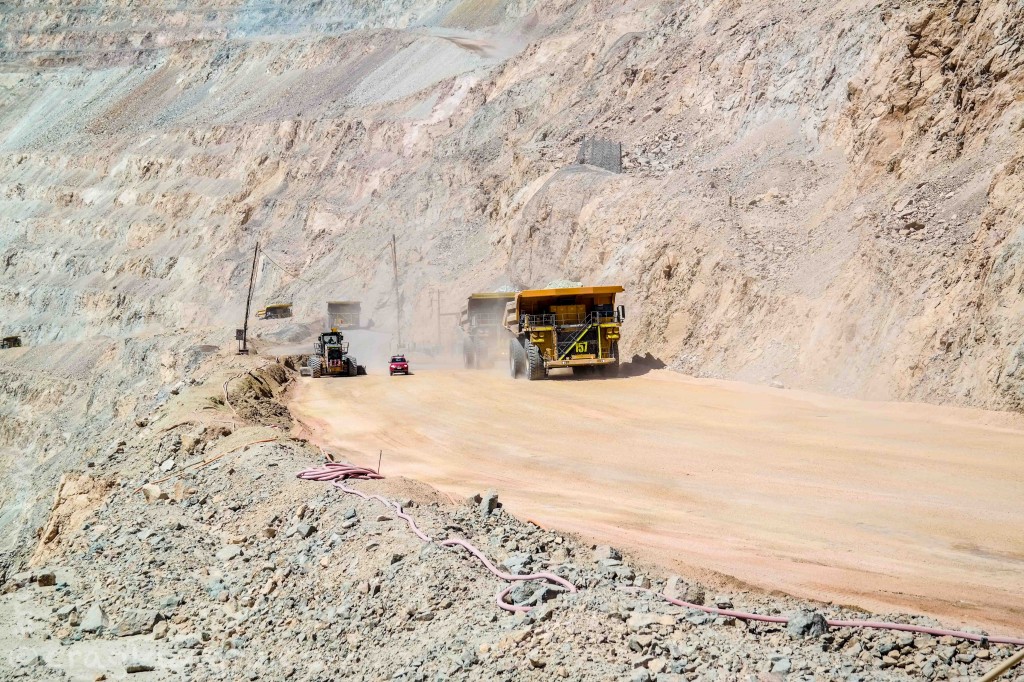 The open pit is massive at 4.3 km long, 3 km wide and over 900 m deep. Each of those little tiny specs in the pit are those gargantuan dump trucks!

That is one massive whole. There’s a good chance the computer I’m typing on right now has copper in it that originated in that giant hole. Crazy. Next up we tried to swing by the equally impressive and massive Paranal Observatory but learned the next tour wasn’t for another 6 days. Bummer! So we hit the road again and motored down to the ocean and hit route 5 on the coast towards Vicuna where there are several more observatories – hopefully one where we can catch a tour with no advanced notice (our specialty).

Along the way a drum brake in the back wore down to nothing and we found ourselves in Taltal where the only person in the entire town willing to work that particular afternoon demanded he do so in front of his house on what has to be the steepest incline anyone has ever decided to take a wheel off a large vehicle! You have to love Latin America. Where there is a will there is a way. His wasted brother gave us giant glasses of water. We were unable to confirm that it was safe for us to drink, and not wanting to be rude, embarked on a secret mission to ditch the water without disrupting the flow of things or getting caught. It was pretty funny and the installation received an unscheduled rinsing. 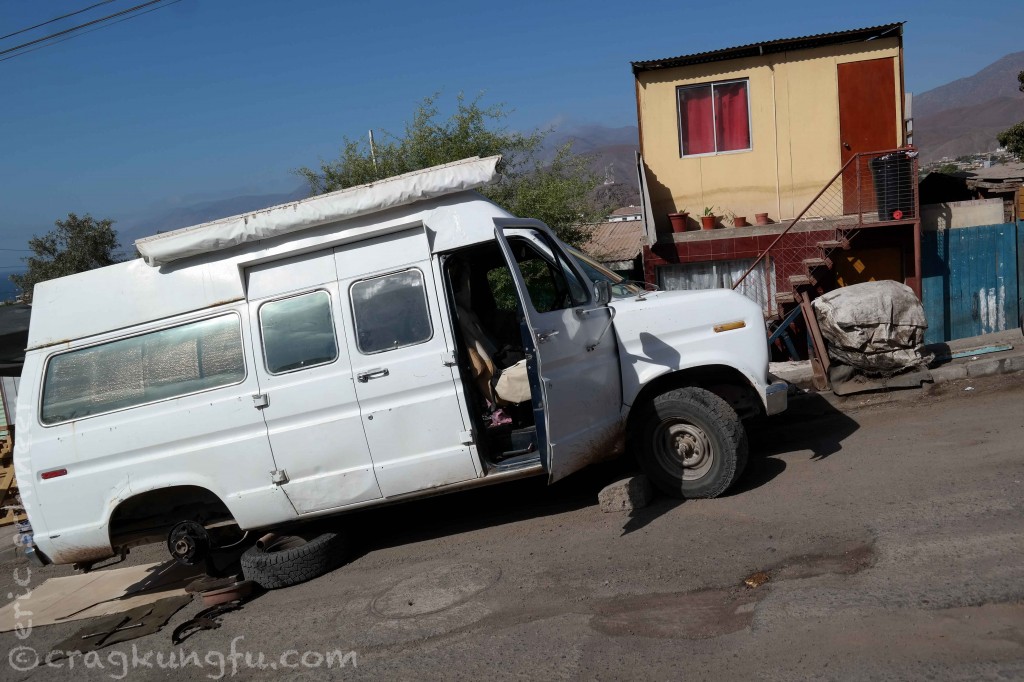 If Vicuna was any more laid back I don’t think anyone would even be awake, ever. Vicuna sits dreamily in the Valle de Elqui where the vineyards and pisco distilleries that supply most of the worlds pisco exist. It’s beautiful country and seeing so much color after so much desert made it even more so to us. We escaped the heat of the day and drank a bunch of pisco sours (when in Rome after all) and spent the evening at Mamalluca Observatory for a night tour! Though amateur compared to the Paranal, the tour was interesting and well done. Sneaking peaks at distance stars is a cool reminder of how vast a place we find ourselves. I highly recommend it.

After camping in their parking lot that night we headed out towards Valparaiso in the early morning and were treated to stellar morning light for some pics of the vineyards stretching out across the valley.

Next up we rolled into Valparaiso. What a cool city. Kind of like the Chilean San Francisco if I had to compare it to somewhere. Besides some good food, just walking around the city was awesome. A labyrinth of cobbled alleys wind their way up incredibly steep hills and past numerous walls filled with colorful street art. 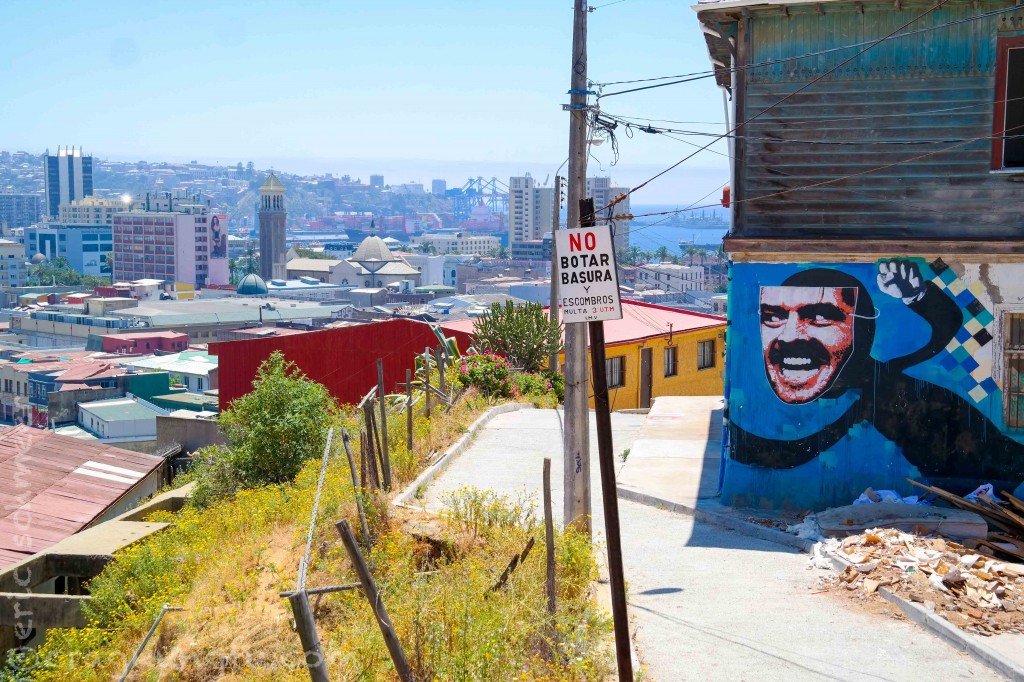 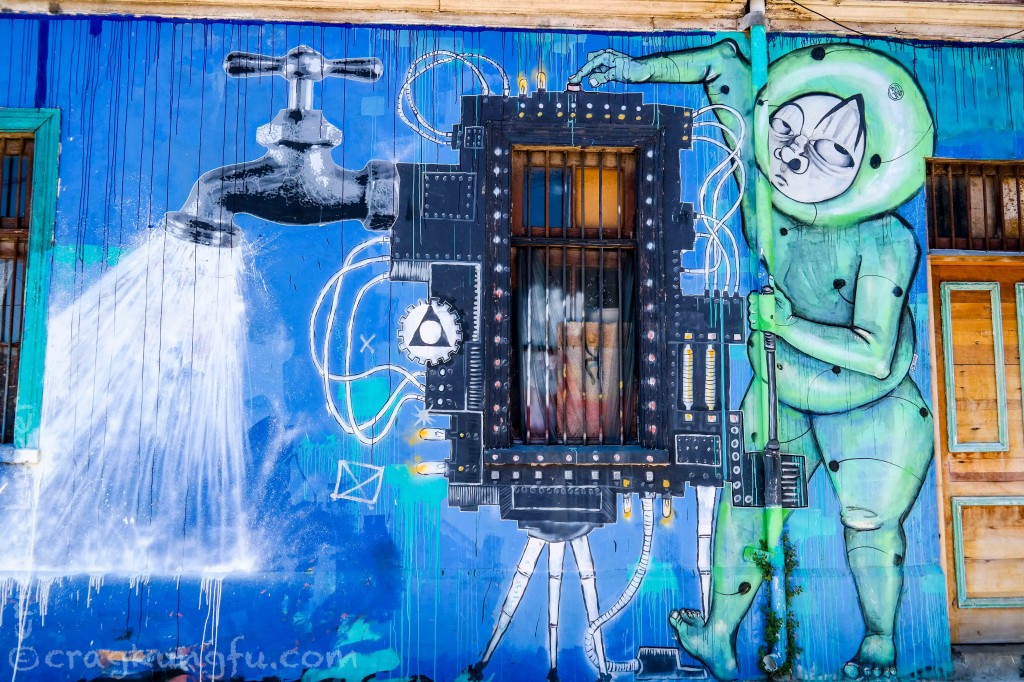 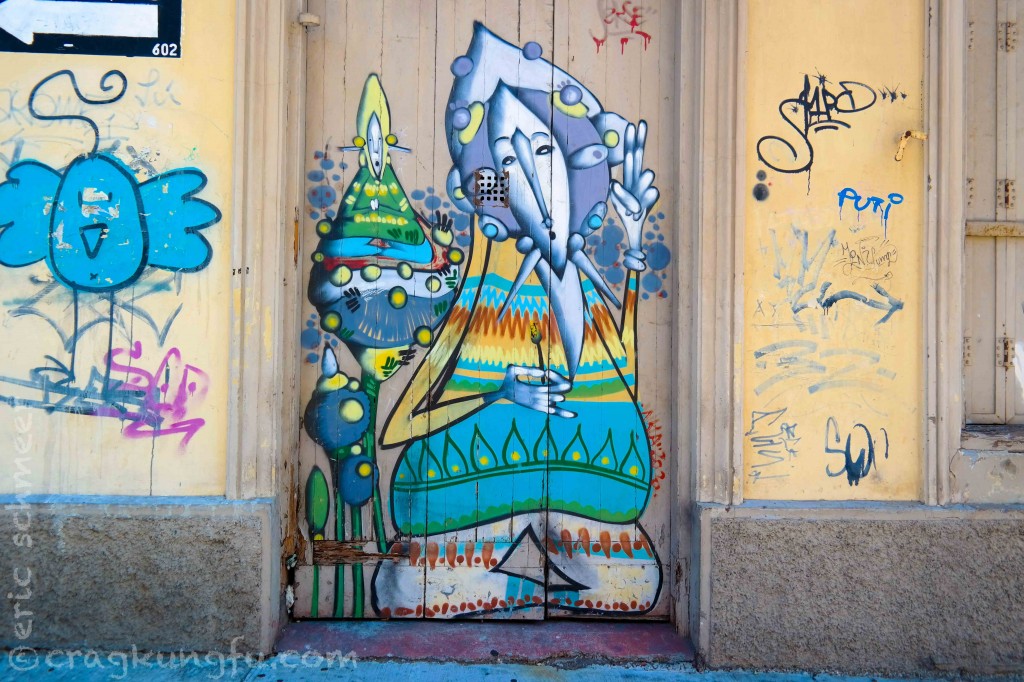 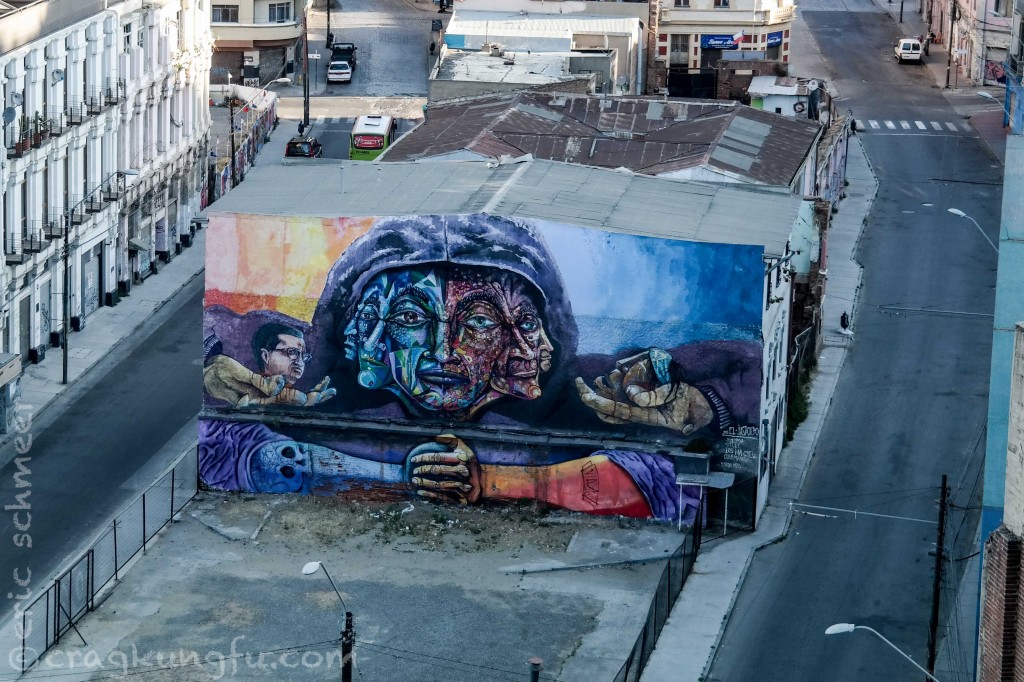 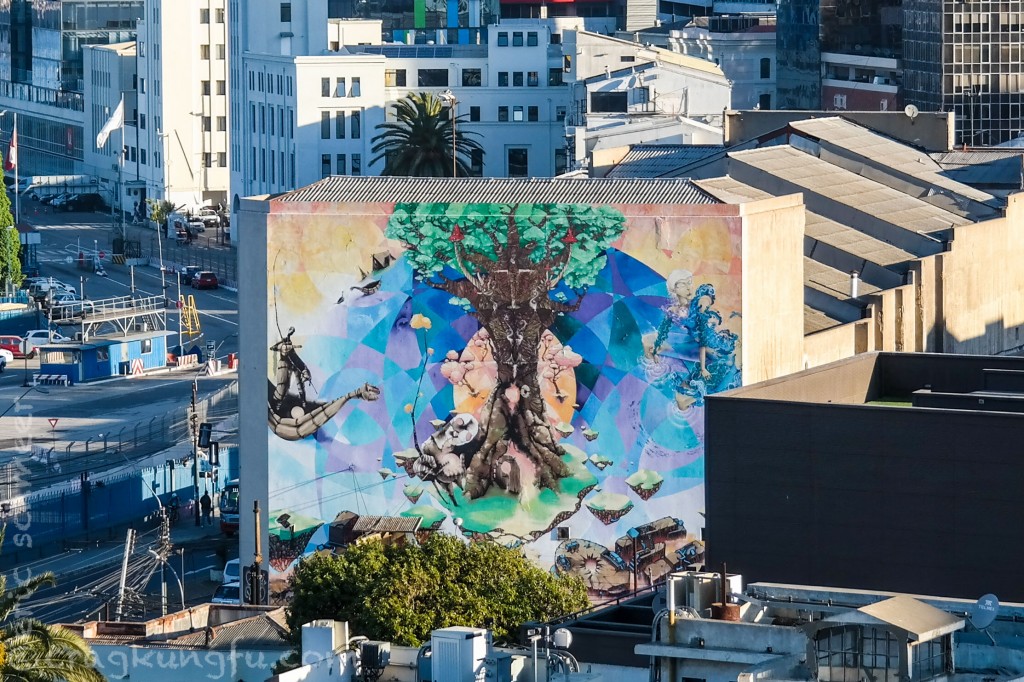 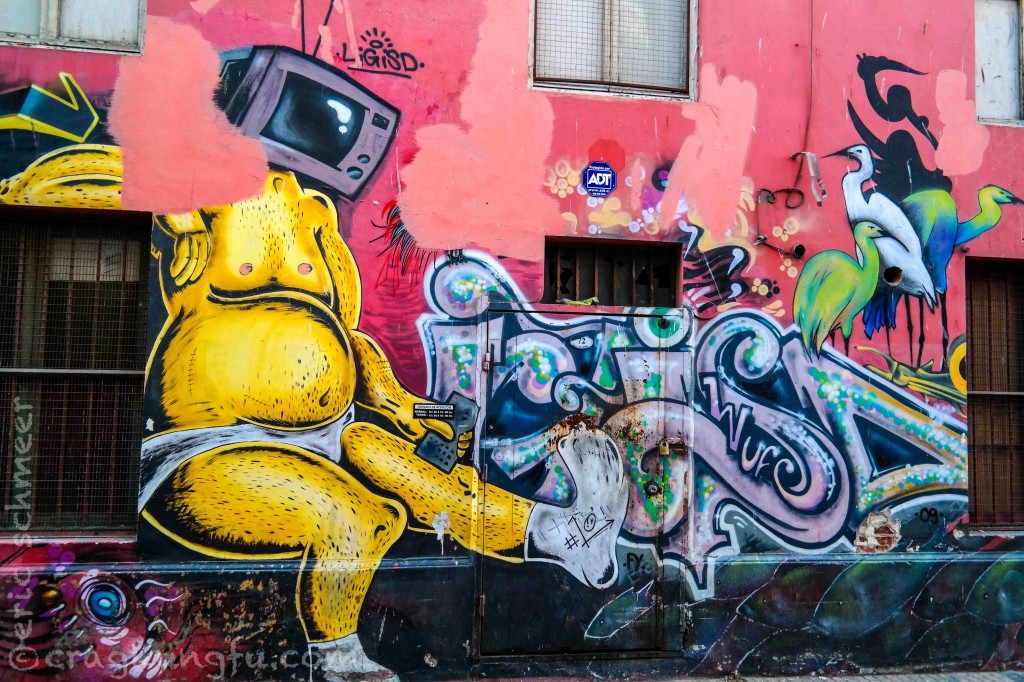 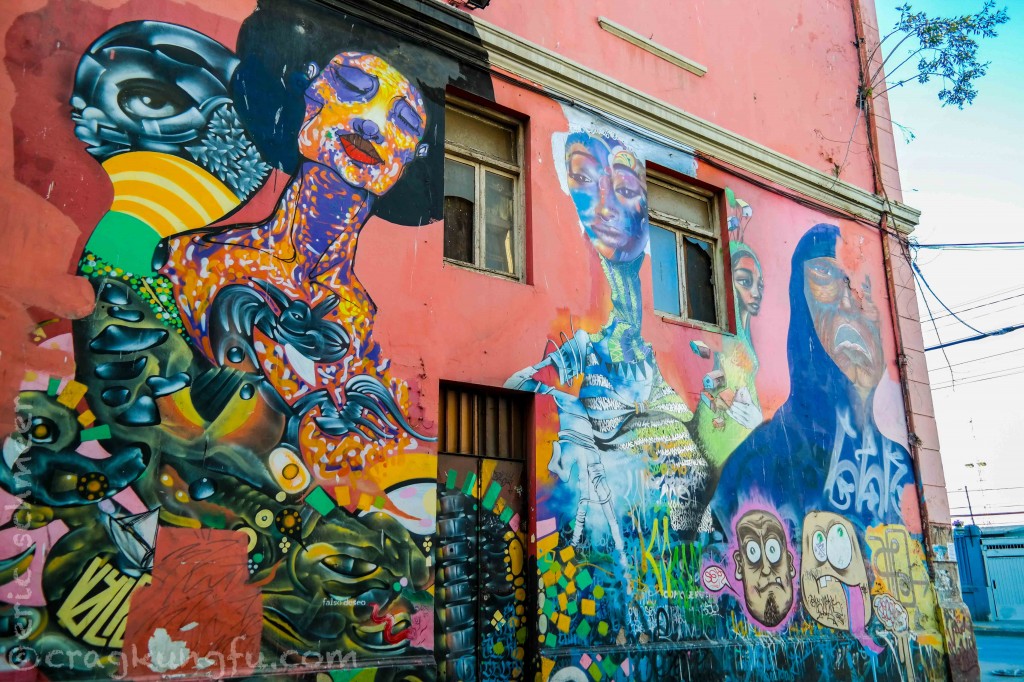 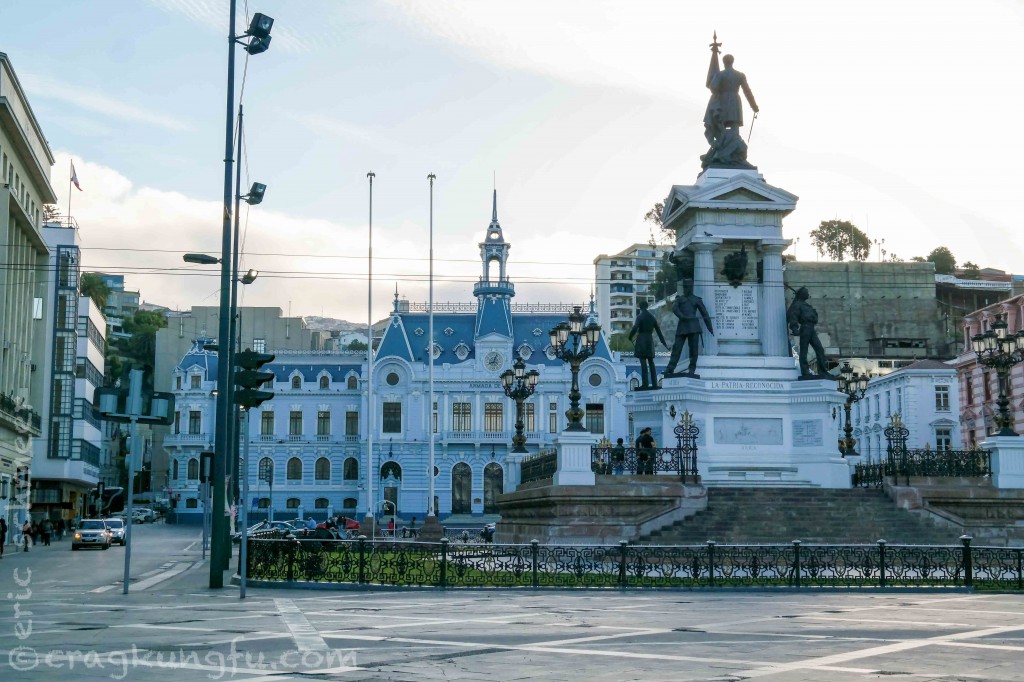 Besides watching an old lady get smoked by a car, we had a blast camped on the street for three days outside a busy gas station right in the middle of it all. Three days of city stealth camping was long enough though and we made our way to the nearest Copec on route 5. The truck stop gas stations in Chile are really nice for our style of travel. They have overnight parking, public bathrooms, sinks with drinkable water, hot showers, and even free wifi! Camping in Chile so far has been really easy.

Can you hear that? That’s a future meet up with our pals in Mendoza calling. Sounds like more good times, a new country, and a sweet time to celebrate 1 year on the road…! Time to cross the Andes again. Hasta pronto!