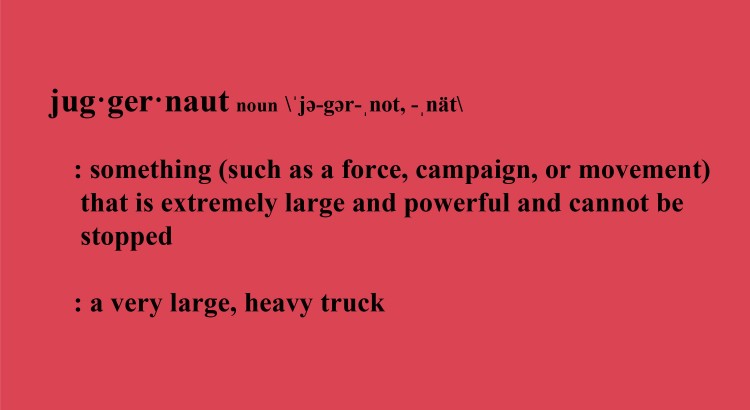 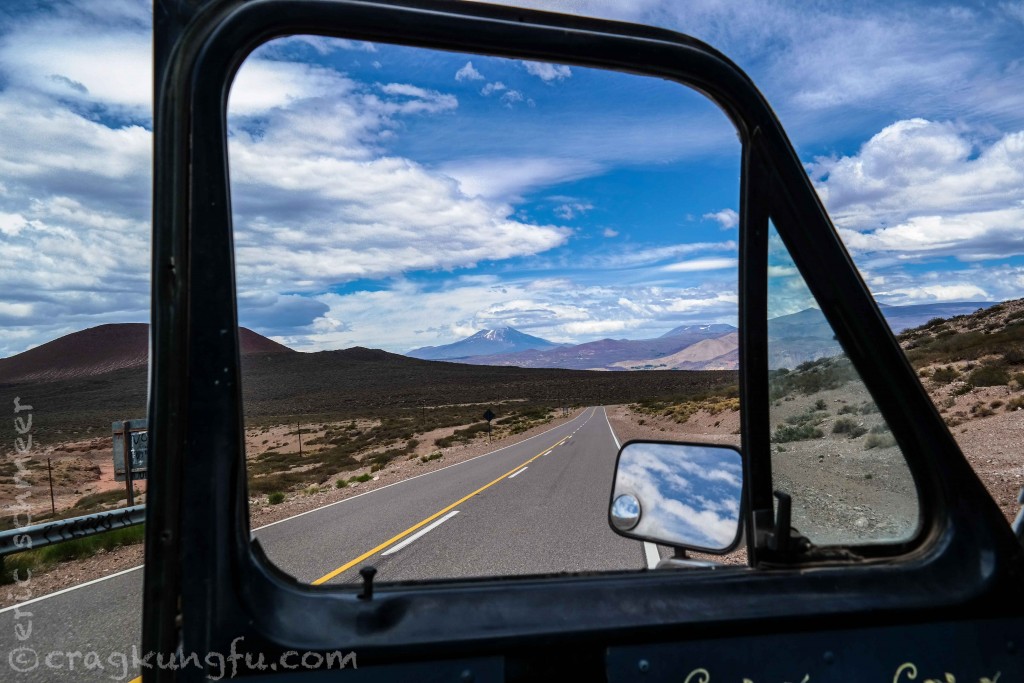 Our first stop was Barriloche. A very beautiful area with mountains that reminded us of home and a climate to match. The lakes were massive and the city, though quite touristy, was pretty cool. 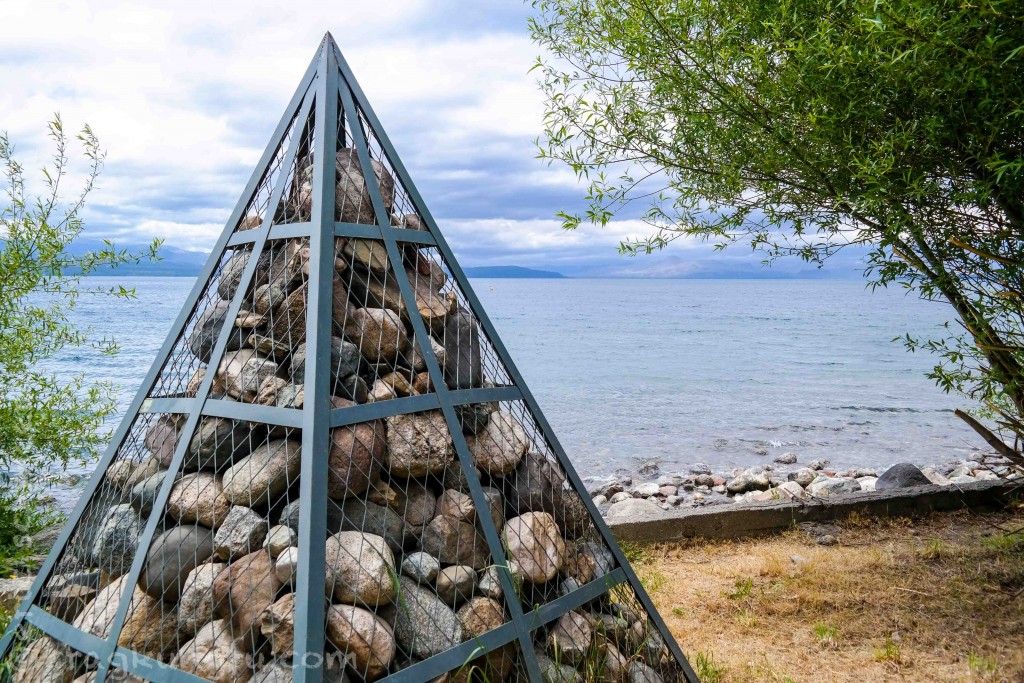 We wasted no time packing our gear up and heading to The Frey – a climbing area with an untold number of amazing granite spires waiting for us to climb them! It’s about 6 miles up to the refugio with the last half of it being pretty steep. After over a year of trekking, climbing, and backpacking over the Americas, our footwear had finally sputtered it’s dying breath. Hiking boots and approach shoes were pretty much DOA for both us when we set out. We both ended up with A LOT of blisters. Nothing like shoving swollen, blister-ridden feet into formed climbing shoes and then jamming them into cracks! But hey, it’s not like we hiked all that stuff up there to sit around the lake and watch other people climb. Not a chance! 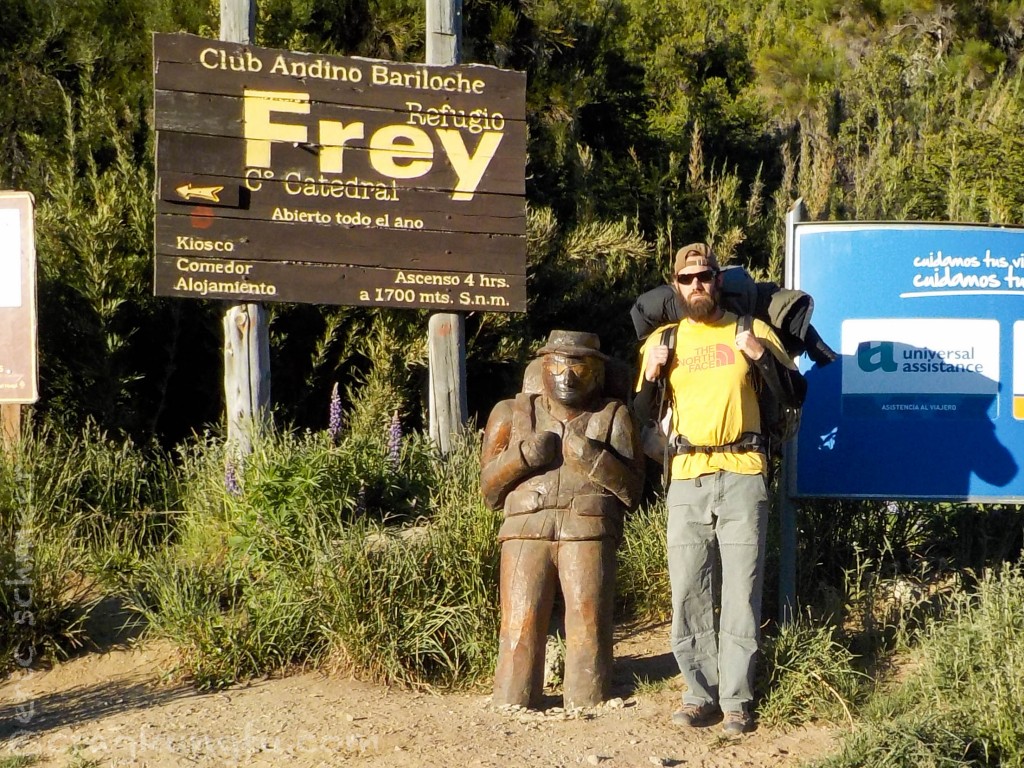 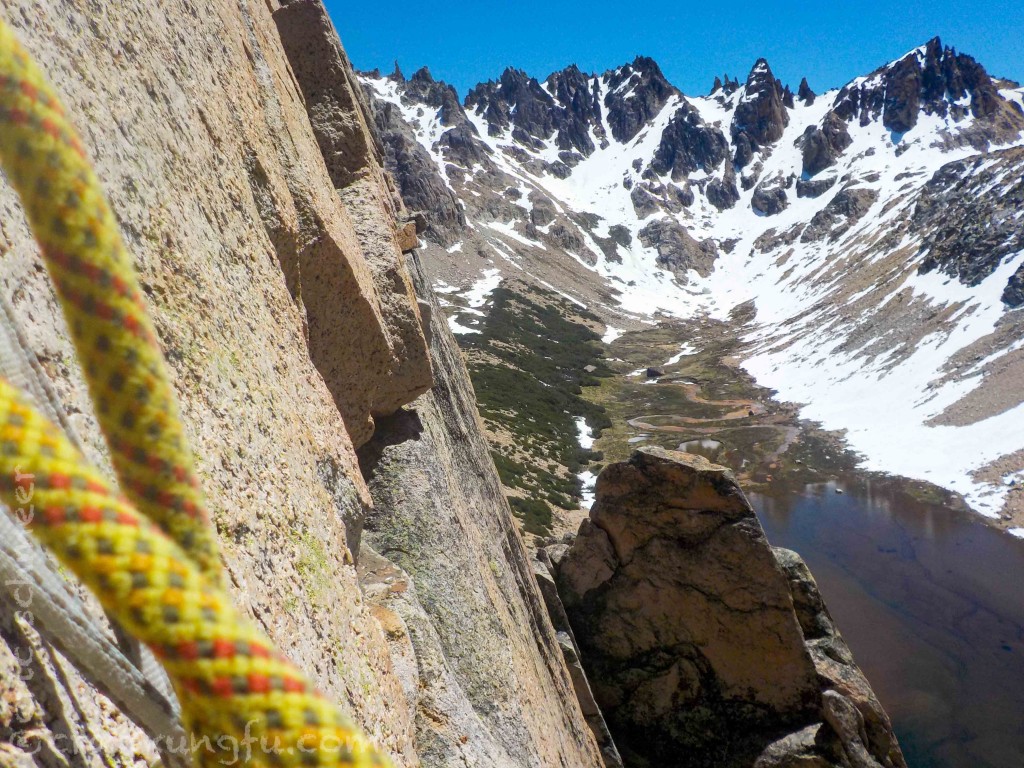 The climbing was absolutely amazing and we made a lot of friends while we were there. But the food ran out and we knew we had to hit the road, so we eased our feet back into our ruined kicks and motored off down the trail. It’s funny, after spending so much time in third world countries we still marvel at novel little things like paved roads, national parks that are actually managed, and signs! This, for instance, is a wooden bridge. 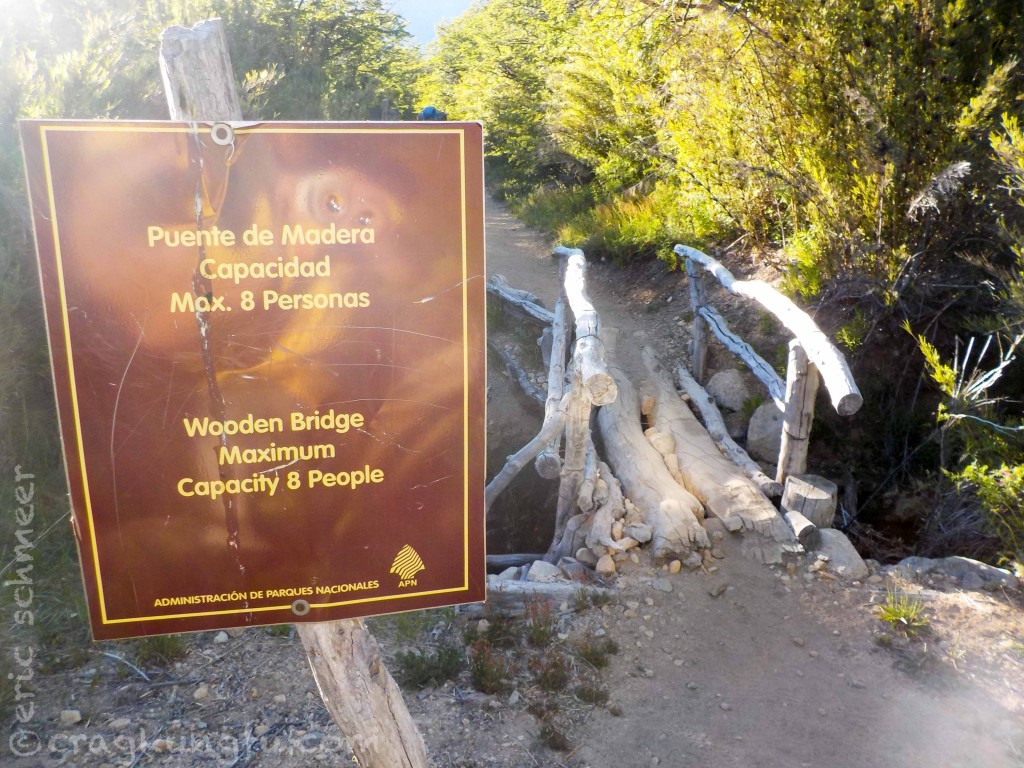 Not to be confused with a metallic bridge. 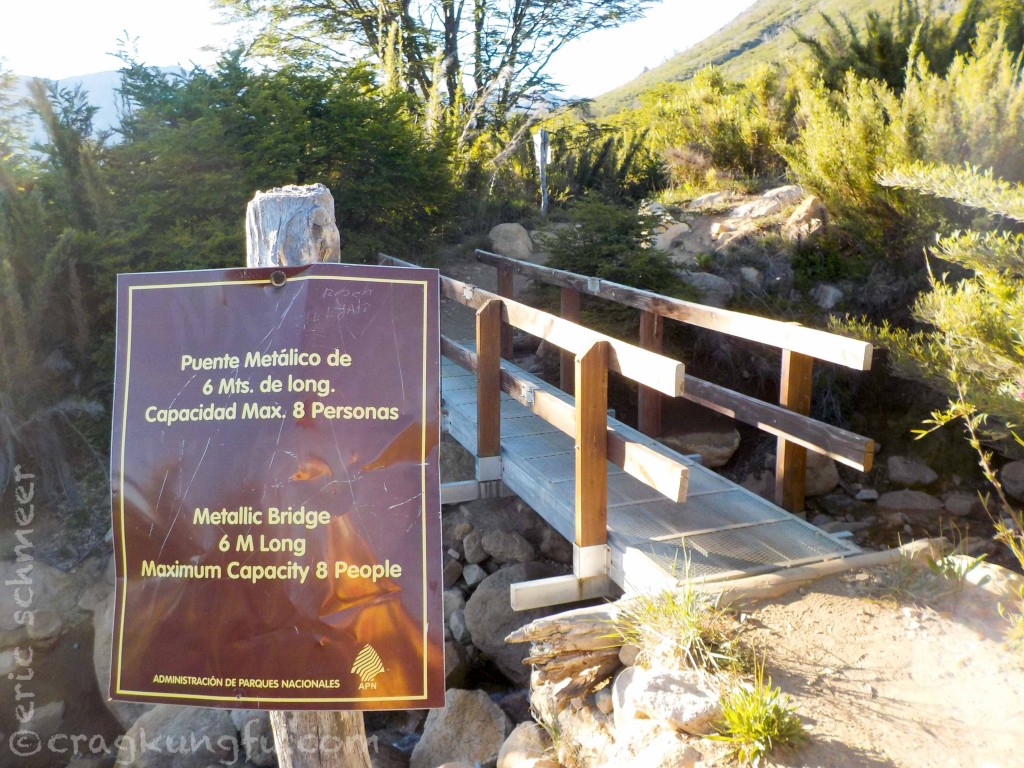 And, of course, the completely arbitrary weight limit for the bridge is expressed in number of persons, just to remind you that you haven’t come quite full circle yet! Hilarious.

The drive out of Barriloche was beautiful, like spring time in the Rockies with flower’s littering the luscious mountain landscape. We stopped briefly in El Bolson before officially heading out into the harsh Patagonian Steppe. 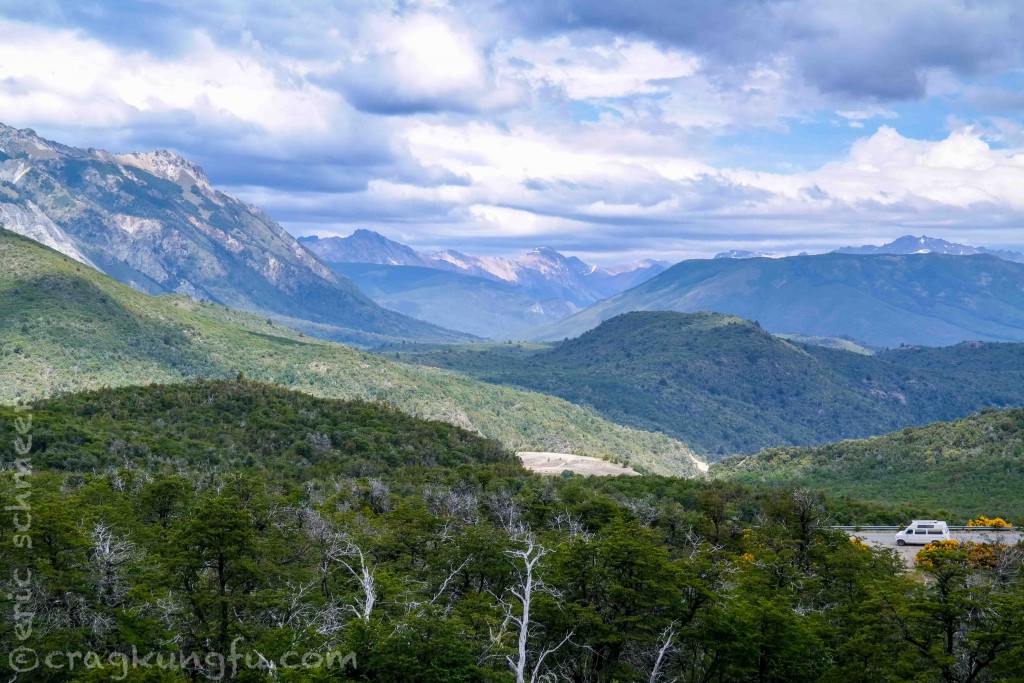 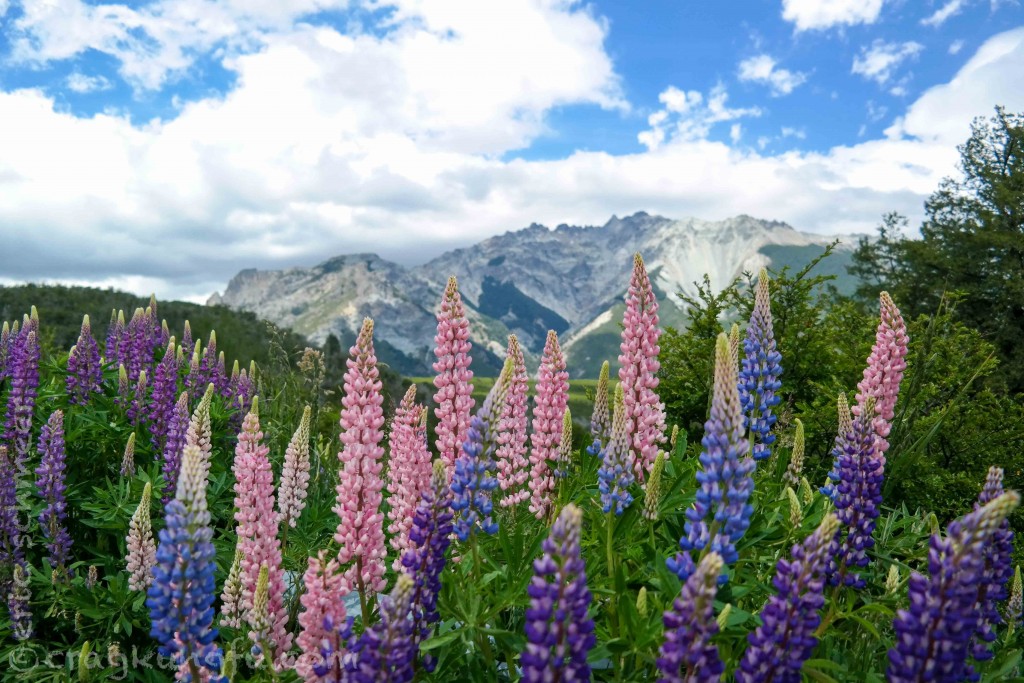 Route 40 in Argentina is something like the famous Route 66 in The States. Very long, desolate stretches between tiny little “towns,” and if you’re lucky, a gas pump. I say gas pump because they don’t really qualify as stations. At one point I found myself wandering around a little bar (the only building for as far as we could see in any direction) until I finally found the man responsible for operating these beauties! 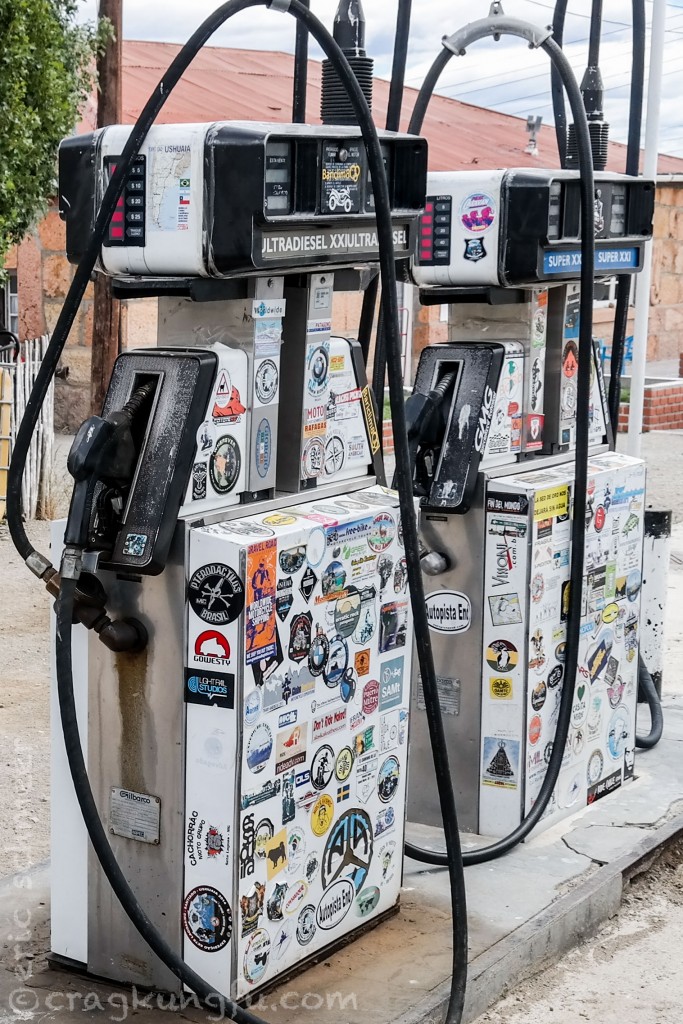 But hey, not only did the pump work, but they had gas too! This is not always the case. Score! Another nice surprise was that the Argentinian government has been furiously paving route 40 and the multi-hundred kilometer section the map showed as totally dirt was almost entirely asphalt! Though it did have a few remaining rough sections, the Guanacos and turquoise colored lakes made driving those sections slowly a blast! 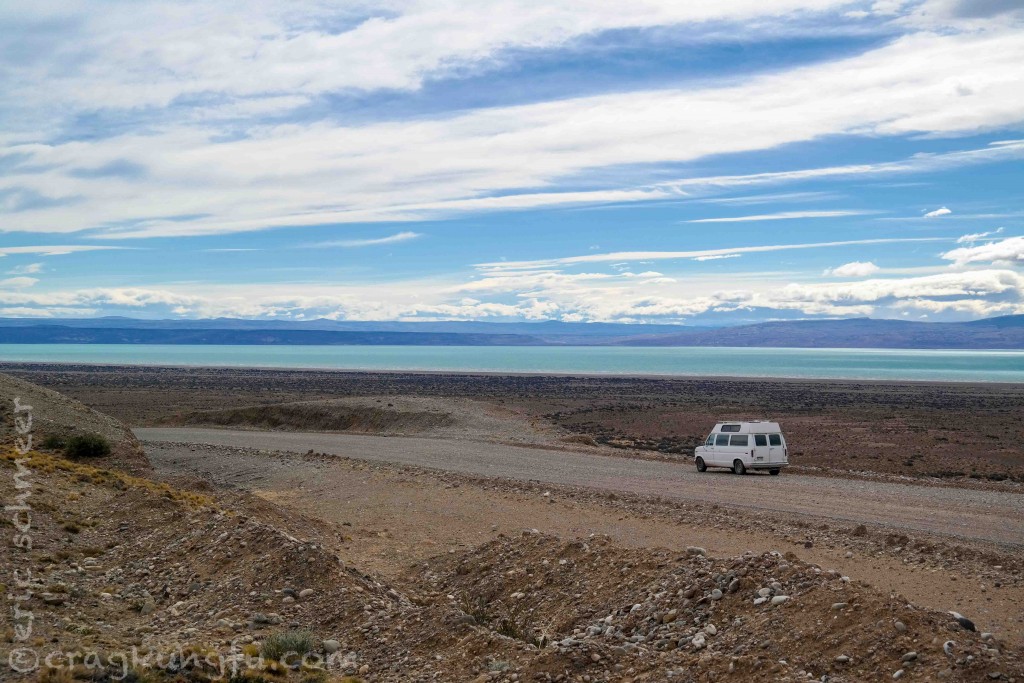 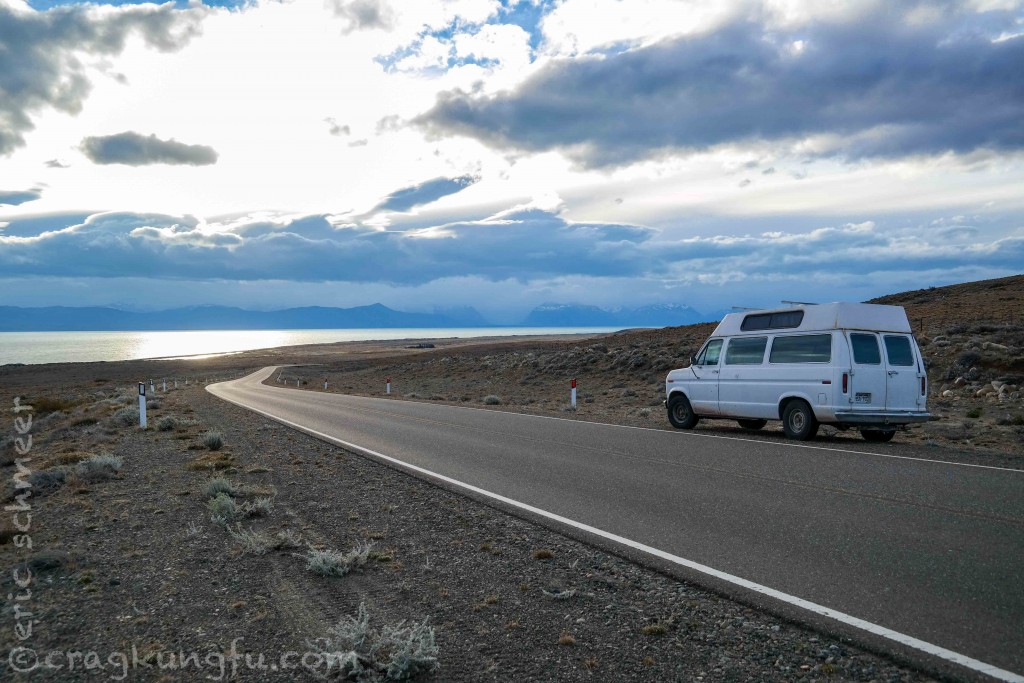 After several days of driving we finally arrived in El Chalten where we instantly fell in love with the place. It’s very much a tiny mountain town situated in a valley with endless backpacking and climbing surrounding it. The locals are mostly hippies and climbers and there are tons of quaint little hostels and bars. We arrived just after a storm had moved in and spent the first night wondering if the exterior lid to our rooftop fan would rip off in the wind as sideways rain pelted the van giving it a much needed rinse. With limited time, and this being our last climbing stop of the trip, we went climbing in the stormy weather the next day!

We also hiked around Fitz Roy and Cerro Torre for a nice 20+ km day in the National Park. It was stunning. The looming granite walls hold some serious alpine routes – you can’t help but stare at them in wonder… if you can see them. 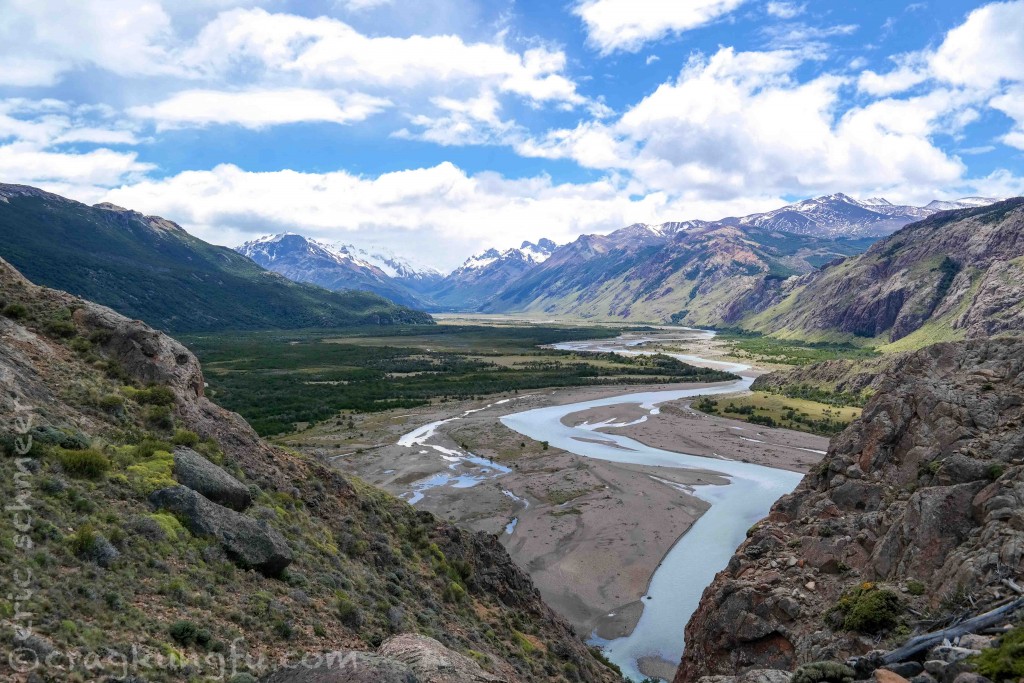 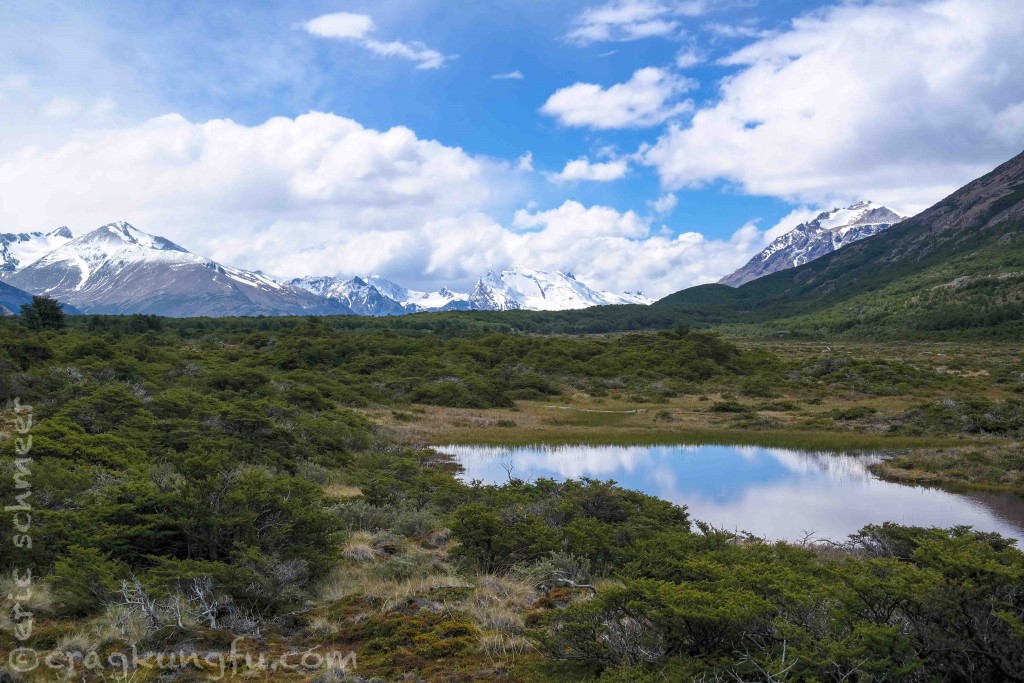 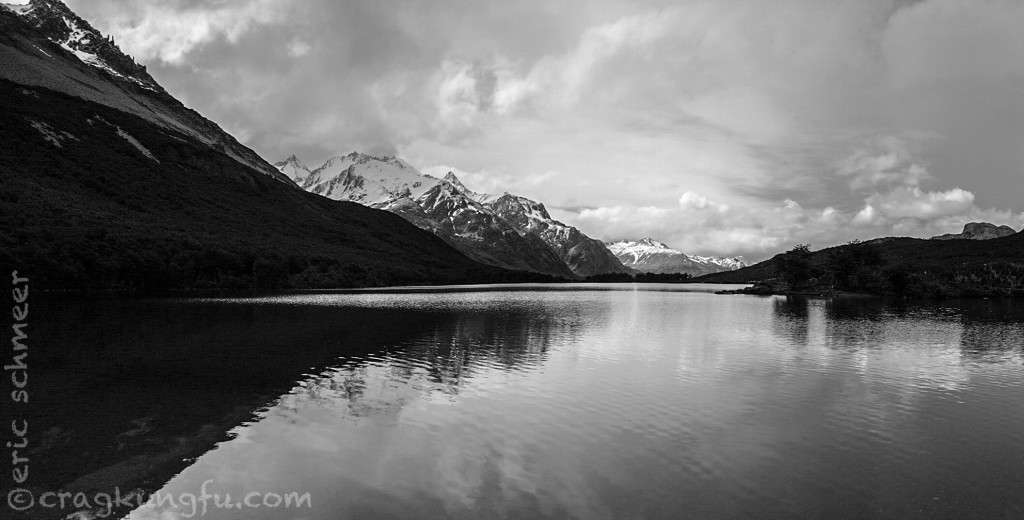 We also heard El Chalten was THE place to sell gear – which we had a ton of. We posted up in Porter’s–a bar frequented by the locals–with a list of prices and asked if anyone was interested. It was hilarious, within minutes calls are going out on cellphones and walkie talkies and before we knew it half the town had stopped by! We sold every single item on our list–shoes, ropes, cams and more–in only a few hours! 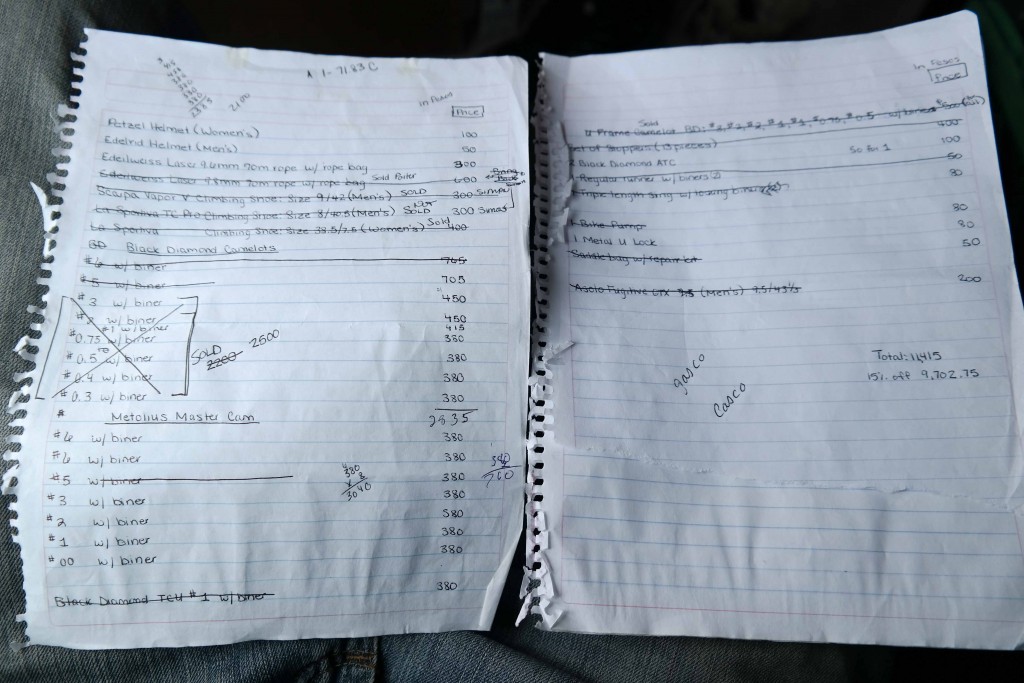 But before we handed the rope and shoes over, we ran off during an excellent weather window to romp up one last climb. It turned out to be a good one and the view from 5 pitches up was excellent! 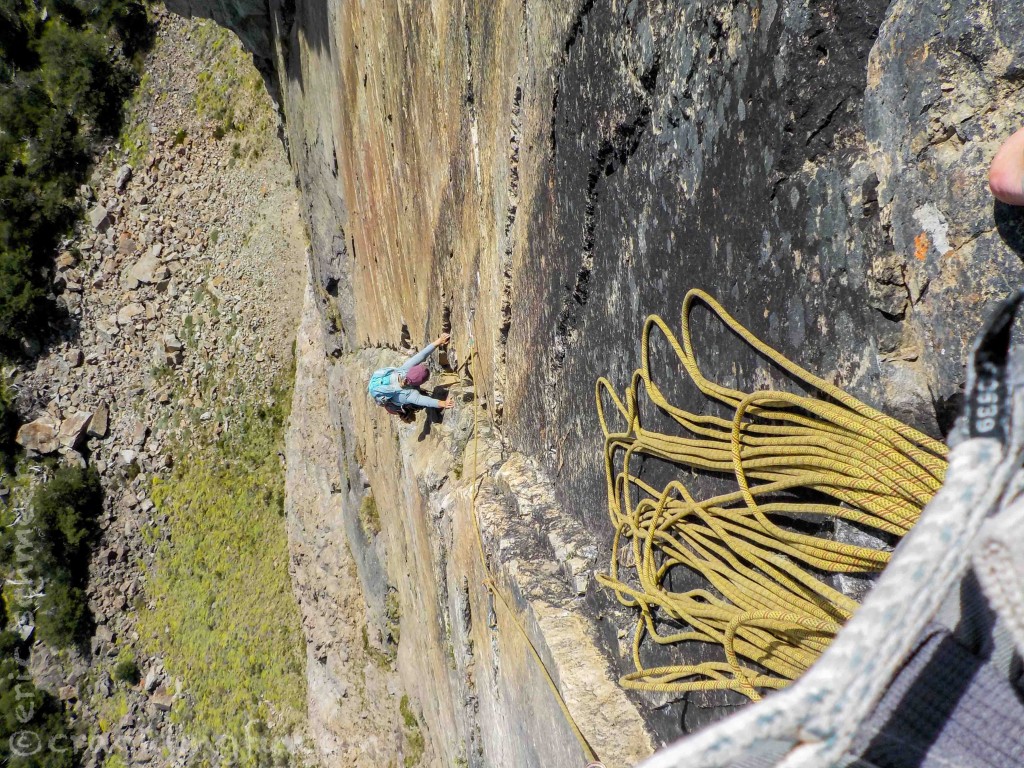 And with that, we handed over the last of our gear, parked for one more chilly night in town, and hit the road the next morning. Only a few more stops before Tierra del Fuego and quite literally, the end of the world! Juggernauts OUT!