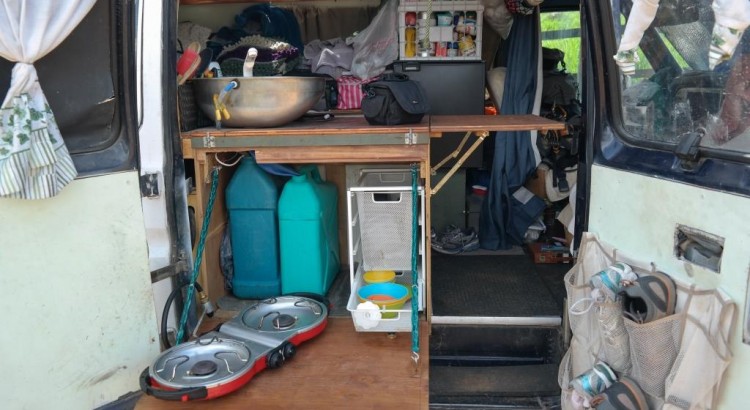 Oh the things you think you’ll need and never end up using… and those things it never occurred to you to bring that could have been game changers. You know what they say about hindsight, well here’s ours.

Gear (in no particular order)

Tire repair kit – Never used it once… but very glad to have it.

Solar shower – Never used it once, wouldn’t bring it again. We were fine between campground showers, swimming, and hostels. Even when you’re overlanding and camping, almost any hostel will sell you a shower cheap even if you’re not staying there. That said, we would often go many days without a proper shower.

12v air compressor – Never used it once… but very glad to have it.

Toilet chair w/kitty litter bags – We were worried about the lack of bathroom in case of an emergency. Though the lack of bathroom was an issue occasionally, we still never used the chair/bag thing. Always bring your own TP and little money when you set out to find a bathroom – most countries along the Pan Am do not have typical public bathrooms. More on this below under “trap door!”

Axe – Never used it once. We also only had 2 or 3 campfires the entire trip.

Shovel – Handy occasionally, but didn’t see a lot of use.

Leveling blocks – Used extensively. Great buy. Two sets might have even been a good idea.

Jerry Cans – The only time we used our jerry cans was in Bolivia and we barely had a 200 mile range with a full tank in the van. That said, they do make you feel a bit better when setting out into nowhere. You never know when a gas station will run out of gas for a week. Be sure to routinely pour you cans into the tank and refill them with fresh gas – you don’t want to be putting old gas into your car that time you finally need them.

Permetherin – When we were in some of the malaria/dengue areas we used this stuff on our curtains, clothes, and other items. Hard to say how effective it was. Neither of us got malaria or dengue though.

Collapsible bucket – Really handy. Took up no room and made retrieving water from a river/ocean/lake quick an easy.

Pressure cooker – We didn’t bring one initially but were glad to pick one up. Makes cooking in a van on a camp stove way easier!

Coleman stove – Ours folded in half to be about the size of a waffle iron. Awesome buy and very nice to be able to fold it up and put it away when not cooking. It didn’t have wind protection built in though, which made cooking outside kind of a pain.

Fly swatter – Critical. Do not leave home without this item.

Fantastic fan – Essential. This was the only thing that kept us from roasting to death when sleeping in the van in Central America. Positioning it directly above the bed was perfect. Getting the reversible model was good call too. Venting while cooking and expelling obnoxious smells was handy.

12v fridge – Worth every penny. From long term food storage to that incredibly critical cold beer, do not skimp on your fridge. We also highly recommend the Trucker Fridge – less expensive than a lot of the other major brands, super efficient. After our shore power fried we ran the fridge for the entire second half of the trip off only solar and driving. In Lima we didn’t drive for 10 days straight and the fridge ran completely off solar and every single one of those days was cloudy! That’s an efficient setup!

Foldable sun shield for windshield – We used that thing every single day. Keeps prying eyes out, keeps from overheating, and it helped at night in stealth mode.

Awning – Mixed on this. We thought we would use it all of the time and really, we only used it a handful of times. When we did use it, it sure was nice, but I’m not sure how important it was considering how much it cost.

Water purification stuff – Bring a filter or pump of some kind, but mostly for back packing. We were surprised to learn that you can buy purified water in bulk practically everywhere the main water is not drinkable (which is practically everywhere). Our internal water tank was removable and portable (7 gallons). We would bring it into the stores with us where they sell 5 gallon deep-rock-style jugs. Often you must have a returnable bottle with you to get a new one and they won’t accept bottles from other stores/brands/countries, etc. When we would bring our tank in with us we would just dump the water into it right in front of them and hand them their same bottle back. We used this technique in nearly every country we visited.

Tarp – Wish we would have brought one. Very handy for pulling everything out of the van during a cleaning or for making an area to chill on under the awning.

Solar panel – So awesome. We always had power even when we were parked in one spot, off the grid completely, for days upon days. I would have mounted it to the roof differently though. For one thing, it was right smack in the middle so when we had surf boards and whatnot up there they would compete for space and it was difficult not to block the panel. I would also make the mount adjustable in the future so that I could point it right at the sun regardless of what orientation we parked in.

House batteries – The follow up to the solar panel. We didn’t buy spendy AGM batteries and in hindsight we should have. In places where it was really hot we had charging issues with our cheap Walmart lead acid batteries. They still got us through the trip, but in future I’ll spring for the nicer ones.

Propane bottle – We brought a big 15lbs bottle. It didn’t need to be that big. Because we only used it for cooking (and heat a few times) and not for powering a fridge, we could have gotten away with a smaller bottle that took up less space. We refilled the bottle once in Ecuador because it was so cheap but when we sold the van in Ushuaia it had at least 3/4 left in it.

Mr Buddy propane heater – Good buy. We didn’t use it a lot because the majority or our travels were in warm temps, but when we were in cold places the heater was awesome! Utah in the middle of winter, El Chalten when a freak storm made the van feel like it would topple over in sideways sleet, Torres del Paine after a long back packing trip… so nice. I would buy a smaller version next time for a van though. We could only leave the thing on for about 15 minutes before it would be too warm in the van – the van being insulated so well was probably a big part of that.

Van windows – I really wish we would have tinted them and screened them somehow – especially the screen part. Lots of bugs everywhere, lots.

Rotating front seats – Spinning the front seat around to chill out was something we often did multiple times a day. Great feature. The seat did not recline though, and that would have made it even better!

USB ports – We only had two ports up front and they were awesome, but we should have put at least 2-4 in the back where we slept as well.

Sink/Grey water tank – I had plumbed the sink directly into a 4 gallon removable grey water tank. It worked fine but in hindsight I would have plumbed the sink directly out the bottom of the van to the ground. In sensitive areas we could simply place a small tub or pan under the car to catch our grey water and then dispose of it where ever appropriate, but for 99% of the places we went to, going straight to the dirt would be fine and it would have saved a lot of room under the sink.

Trap door in van floor – In any future build I would place a small trap door in the floor for emergencies. It might sounds funny or gross to some, but the reality of living in a van with no bathroom and stealth camping in busy cities and such is that eventually, you’ll need it and be incredibly happy it’s there.

Safe – We used the safe a lot, especially for passports and paper work but definitely for devices and a laptop when we were away from our home on wheels as well.

Hidden starter switch – Really easy to install and a great feature. Simply snip the wire from the solenoid to the ignition and rig it to a switch hidden somewhere convenient around the dash area. That way the vehicle cannot be started without knowing where it is and pushing it.

Converter – Not sure how I missed this when designing the electrical system, but I should definitely have installed a 120/220 converter so when we got away from the North American standard we could still have plugged the van into shore power. I didn’t know it switched to 220 in Peru and fried our inverter.

Multiplug adapter – One of those simple things. We could have bought a nice cheap one in advance and not had to buy several different crappy ones along the way.

Tires – DO NOT SKIMP HERE!!! We spent the extra money on nice tires and couldn’t have spent the dollars better. We didn’t even get a flat tire until Bolivia! Buy the nicest tires you can afford.

Ford van – The van got us to where we wanted to go and didn’t cost us a fortune. But, we did a lot of repairs towards the end and the stress of finding mechanics started to wear on us quite a bit. Also, the availability of parts is a huge consideration – especially if you’re going to drive something old. I thought Ford parts would be readily available abroad… not the case. Can’t go wrong with a Toyota though…

Clock/thermometer/altimeter – One of those things I wish I had installed at home when I had access to Amazon.

GPS – Largely useless to us. We relied more on chached google maps and iPad apps when we used GPS at all.

Tool box – Having a decent set of tools is a must. You can always find specialized tools or things you wouldn’t use frequently in a pinch, but having the basics on hand made things much easier.

Camera – We bought the mirrorless NX-300 from Samsung. Couldn’t have been happier with it. Small and compact for a DSLR quality camera. Interchangeable lens, great auto and manual shooting modes and a relatively easy price tag. Two things I wish someone would have told me: bring a wide angle lens for shooting the never ending landscapes you’ll find yourself in, and bring a usb shutter trigger for shooting those sweet night shots of the stars in Bolivia and Chile!

That’s about all I had in my notes or that I can think of off the top of my head. I will add to this if I think of more in the future.